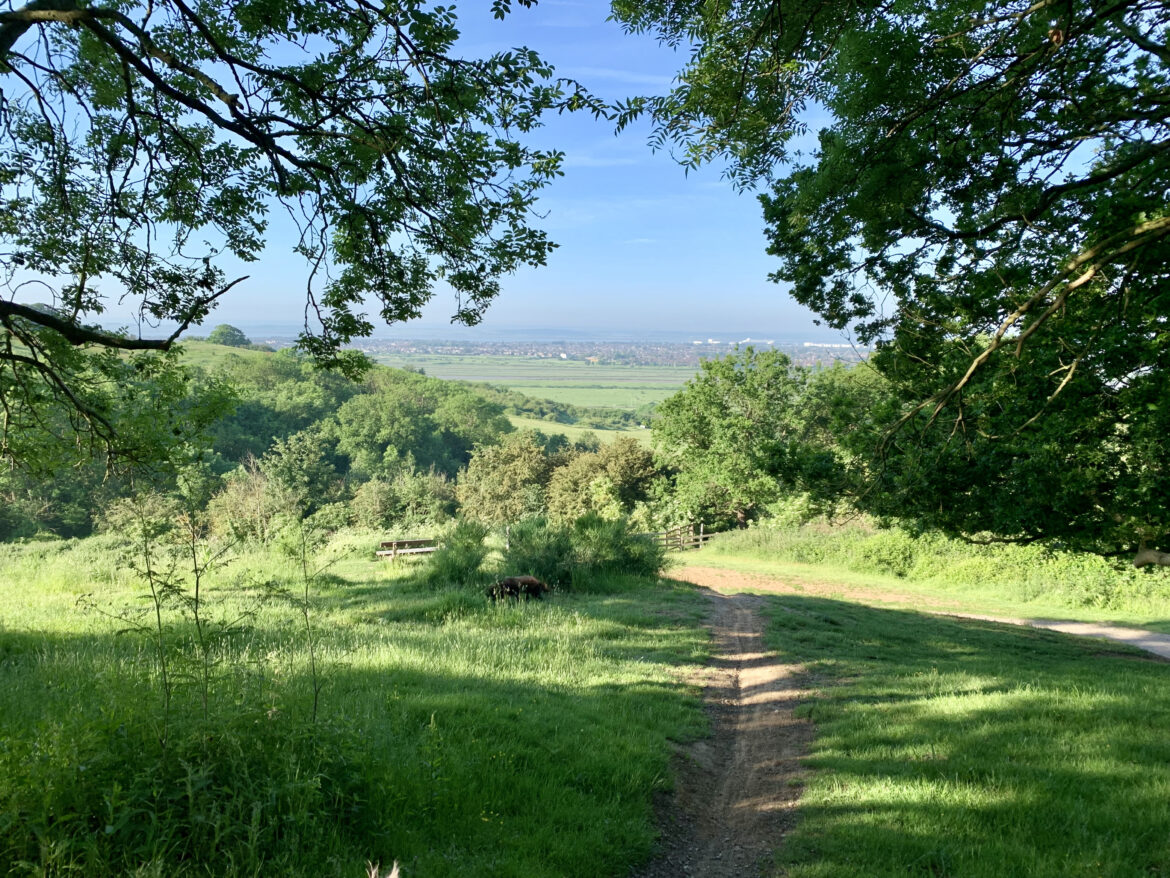 I was up early this so that I could get the boys walked before it got too hot, so by 6.30am we were rolling into the carpark at Hadleigh Castle. Originally I was just going to walk the track that loops around the castle and then have a little stroll through its grounds, but I changed my mind seeing as it was such a gorgeous morning and opted to walk through to Hadleigh Country park and back instead, a route which I hadn’t walked before.

Walking past the castle the track leads down the hill where at the bottom it meets up with another track that leads parallel with the railway line. I chose to walk right towards Hadleigh Country Park but if you turn left instead it will take you through to Leigh on Sea. A few hundred yards walking and a small pathway opened out on the right hand side so I decided to explore up there and it start my accent through the grounds of the actual park. It was lovely walking through the over hanging bushes before the pathway opened out into a large area of scrubland with a steep hill to climb. Idling up this hill I was pleased to get to the top where a small platform had been built to allow a great few of the castle, and it was here that I made my first Latte pitstop and took my ‘Brew With A View’ photo. Ten minutes later and I was off and trapping more of the tracks that had been built for the Olympics mountain bike circuit years ago. Every so often I,d get a fleeting glimpse of a cotton tail disappearing into the bushes as a rabbit ran away from the pooches, and everywhere I walked I could here the song birds singing their morning chorus.

I carried on wandering along the tracks until I eventually came to the hub of the country park and the cafe, unfortunately it was closed, it wasn’t long after 7am so I’ll forgive them, as a nice cold drink would off gone down a treat. I could off walked back via the fishing lakes, which would of been a shorter route, but I decided to walk back further along towards Benfleet and follow the tracks down hills until I reached the railway line track then follow that track back ottar’s the castle. The sun was getting strong by now so I had a little sit down beneath the shade of a tree and finished by latte and gave the boys a drink of water. It wasn’t long before I was at the bottom of the castle hill but decided to walk further along and back up towards the caste via a route further on. I’m glad I took this route as the amount of wind rose bushes was amazing, there was so many it was as though someone had purposely planted then either side of where I was walking, maybe they had, I don’t know. Finally, my legs were starting to ache from all the hill climbing, I reached the summit of the hill and the castle soon came into sight and it looked spectacular glowing in the strong morning sun. A couple of pictures taken, I recently explored the Castle and you can read my post about it HERE, and I was off up the track back to the van to get my boots off and cool my feet down.

It was definitely worth getting up early to walk this route as it would off been ‘scorchio’ if I had arrived much later. I would recommend this walk around the castle and the country park to anyone as it truly is a beautiful place to visit, but you do have to walk up and down some pretty steep hills so bear that in mind.

I recorded the route in my KOMOOT hiking app and you can view the exact route HERE..

Morning all. First coffee of the day in beautiful

I had a lovely early mornings walk from Hadleigh C

Daisy Daisy, Tell me your answer do.. #bryanscount

Whilst having a little paddle at Thorpe Bay this m

I was walking the banks of the River Crouch at jus

The boys having a swim this morning. #bryanscountr

I had a little explore along the North Norfolk coa

I had a nice sunny walk from Sandon Lock to Paperm

The boys mud running this morning on our walk. #br

Had a little walk around Rendlesham Forest this mo

I found these on my stroll last night. First is Sc

I took a nice local walk last night in between the

Had a nice little stroll round Cherry Orchard Park

The Green-Winged Orchid, quite rare in my neck of

Twas a big breezy on our walk this morning. Www.br