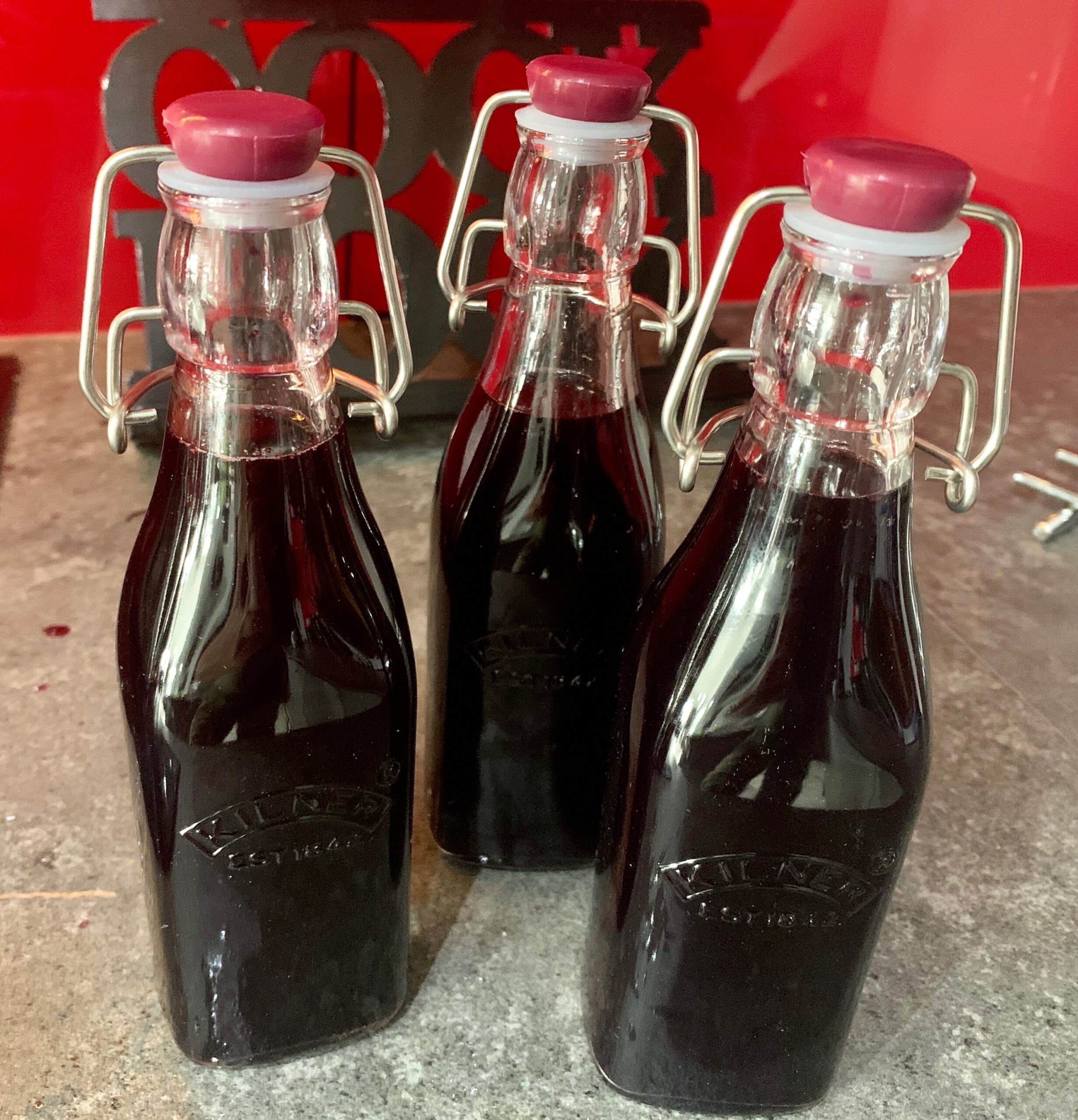 So back in the Autumn I went on a foraging foray and picked myself a good amount of ELDERBERRIES, as well as various other berries, with the goal of making myself some syrup out of them. Apparently once made into a syrup, along with honey, cinnamon and ginger, elderberries are good at keeping colds and the flu at bay. Whether this is true I cannot say but I thought I,d make some anyway.

First step was to find some Elder bushes and harvest their fruits. Fortunately I knew the location of some bushes which I had been keeping an eye on for when the berries were ready to be picked. Picking is actually pretty easy as a lot of the fruits hang low, within arms reach, so all you need is a good sized bucket and maybe a pair of secateurs, personally I didn’t need any as I managed to cut the stems with my thumbnail. The best technique I found was to nip the fruits branch just above where the berry stems join which would then realise all the berries easily ready to be popped in your bucket. In next to no time I had a good haul of the lovely dark, shiny berries.

So the first thing you need to do is separate the actual berries from the stems. This is the hardest part of the whole process as you really do need to remove as many stems as possible as apparently they hold small amounts of nasty toxins in them. The best way is to run a kitchen fork along the stems towards the berries and they kind of pop off.

Once removed give the berries a good wash and place them in a large saucepan and cover them with twice the amount of water to berries. I.E. One cup of berries to two cups of water.

Chuck in a piece of cinnamon stick along with some fresh chopped ginger, or powdered if that’s all you have, and bring to a gentle boil then simmer for another 30 minutes.

Whilst the mixture is simmering give the berries a good squish with a spoon so as to aid the release of all their flavour in the water.

After 30 mins carefully strain the liquid into another saucepan. I gave the berries another good squash at this point so I could get as much juice out of them as possible.

At this point add some raw honey to suit your own taste, a little to keep the liquid a little tart or more if you want it sweeter. Also the mixture should be quite thin/watery at this point and is ideal now to use as a cordial or you can put the mixture back on the hob and carry on simmering until it reduces to a nice thick syrup and this can then be bottled and used as a tonic, taken a spoonful at a time like a cough syrup.

Pour the liquid into sterilised bottles whilst its still hot, obviously being careful not to splash yourself, cap them and leave them a couple of days to cool and infuse more.

I’ve been having my mixture as a cordial and it tastes gorgeous in a glass of lemonade or tonic water. Its definitely worth the effort making and I reckon it would taste lovely as a mixer in a glass of iced Gin too.