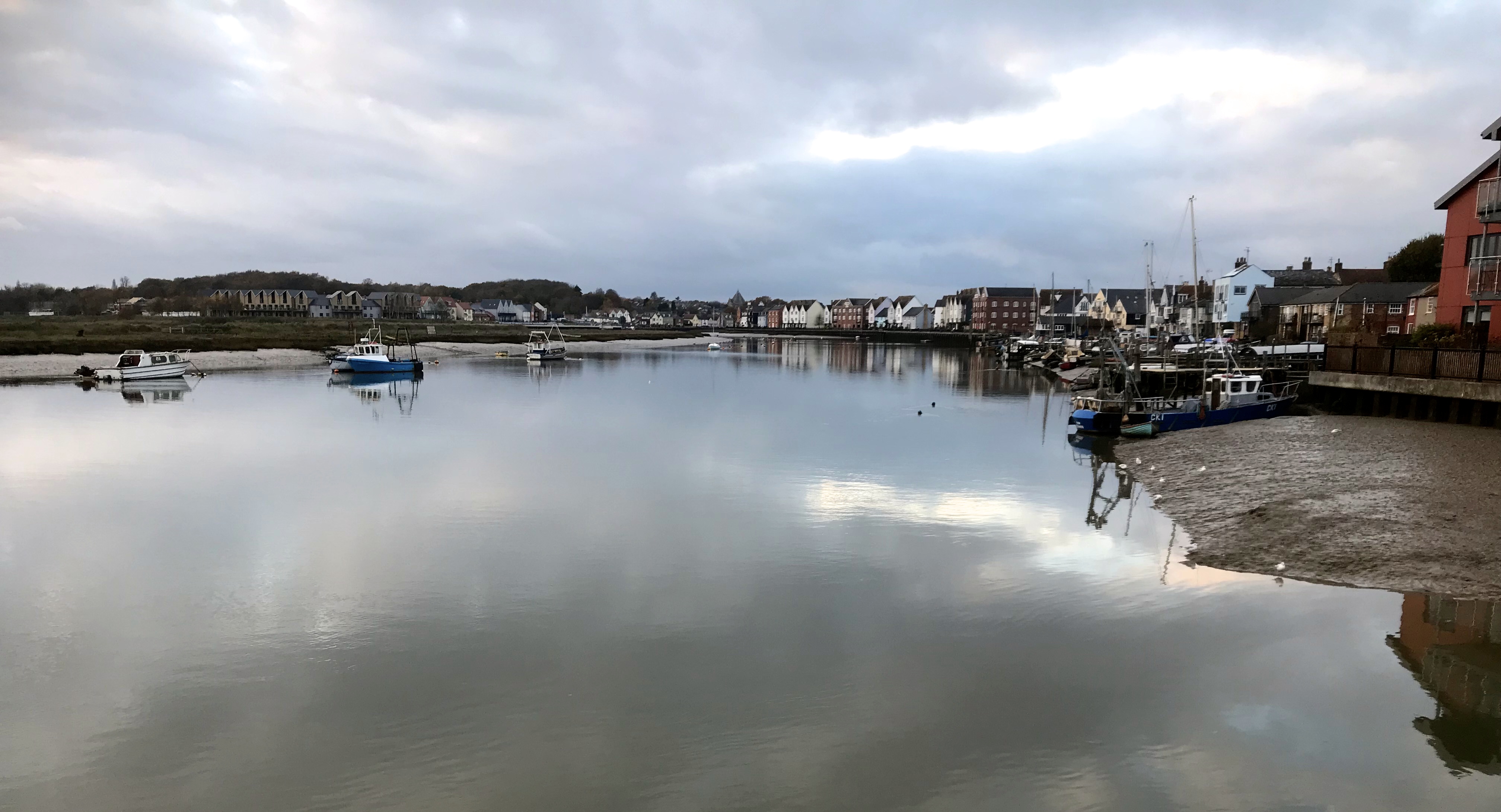 So a few weeks back the better half and i decided to chuck the  pooches into the van and have a day out further up the coast, although its lovely to walk locally sometimes a change of scenery is required. The weather was due to be a bit on the cold side with overcast skies and a stiff breeze, my kind of weather. So dogs loaded in the van, sandwiches made and tucked in rucksack, boots on and we were off.

Our first port of call was St Osyth just a few miles short of Clacton. Now i used to fish St Osyth many, many moons ago with my Dad and family in search of the elusive cod, and remember the place fondly. You used to be able to drive your car onto the beach, if the sea defence gates were open, then drive along the back of the beach for a mile or so before parking up and literally fishing from the back of your car. Since then i,d heard that the shore area had been eroded quite heavily so there was now no access along the beach via vehicle. So as we pulled up at the bottom of the sea wall after driving through the holiday camp i was looking forward to seeing the changes that had taken place over the years i hand,t visited. The wind was a lot stronger than previously forecast as we donned our big coats, and it was also starting to drizzle with rain but that didn,t deter us. Up the slope and over the wall we went and yes, it really had changed a lot. There now was some large manmade rock ‘groynes’ pointing seaward, roughly every 100 hundred yards, to help slow the shores erosion and where we used to drive along the sand was now large lumps of concrete again to stop erosion. We walked along the wall until we could climb over and down onto the shore so the dogs could have a swim and a paddle. I have to say that the first few hundred yards of our walk was disgusting, old toys, household waste, mattresses and bags of rubbish and clothing lay scattered everywhere, it was a dumping ground for any old crap the nearby camp residents didn,t want. I,ve recently been told that on the outskirts of the campsite is a residential area which is unfortunately home to many low lives, and these are the ones who use the shore as their personal dumping ground. We very nearly turned round and went back to the van but carried on walking along the tide line and i,m quite happy we did really as the rubbish got less and less and the marshland got larger and larger. This meant that there was some lovely ‘splashes’ which nearly all held some ducks in hiding from the now increasing wind and rain. We walked for a mile or so i guess before giving in to the grotty weather and heading back to the van.  Neither of us took any pictures as the rain was too heavy and too be honest after the initial shock of the amount of rubbish scattered around, we felt more than a little dejected. In summary, although the marsh areas were nice we won’t be going back there….

So after the awful St Osyth we had a browse on Google Earth to see where else might be worth a visit on the way home. Just down the road was Brightlingsea, somewhere i have heard about but never visited, it had to be worth a quick stop. Well what a contrast this place was, we loved it there.

After pulling into a little car park we were greeted by dozens of brightly painted beach huts which even on this cold and damp day gave a nice warm feel to the place.

We walked past the huts and onto a small promenade which then carried on up a few steps and along a sea wall which i believe went to a nature reserve. We only walked for a short distance before heading back as we had spotted a little beach hut style kiosk which served hot drinks and we both fancied a little warm up.

On the way back we had a quick look at the leaning lighthouse at the end of another small promenade. Odd looking building it was too, but i guess it was built there to guide the boats up the river in earlier times. A couple of guys were enjoying some fishing below this structure and the whole area had a nice serene, calm feel to it. After a lovely tasty, and cheap i might add, hot chocolate at the kiosk we jumped back in the van and headed to our next destination.

Wivenhoe was our next, and last, port of call before it got dark. Again it was somewhere i had heard of but not visited. Well this small village/port made up for the dodgy start to our day out, as it was truly picturesque with small traditional fishing village style houses as well as attractive new builds along the waters edge.

We only spent a short while walking along the rivers edge and exploring a few of the little side roads as darkness was falling quickly, but we loved what we saw. Everywhere was so clean with no rubbish anywhere and it felt like the residents took pride in their village too as there was beautifully kept window boxes and hanging baskets and dressed windows wherever you looked. There was a couple of old pubs along the quayside with little roads running alongside which looked like they could of been used as backdrops in a pirate movie, and the smell off home cooked roast dinners wafting from inside them was intoxicating. Walking back up the hill away from the river back to where we had parked we found a couple of quaint little restaurants as well as a lovely looking deli, obviously we didn,t go in any as we had the dogs with us, as well as more old pubs. We loved this place and will definitely be visiting again but next time we,ll make sure we have more time to sample one of the roasts we smelt mmmmmmmm…