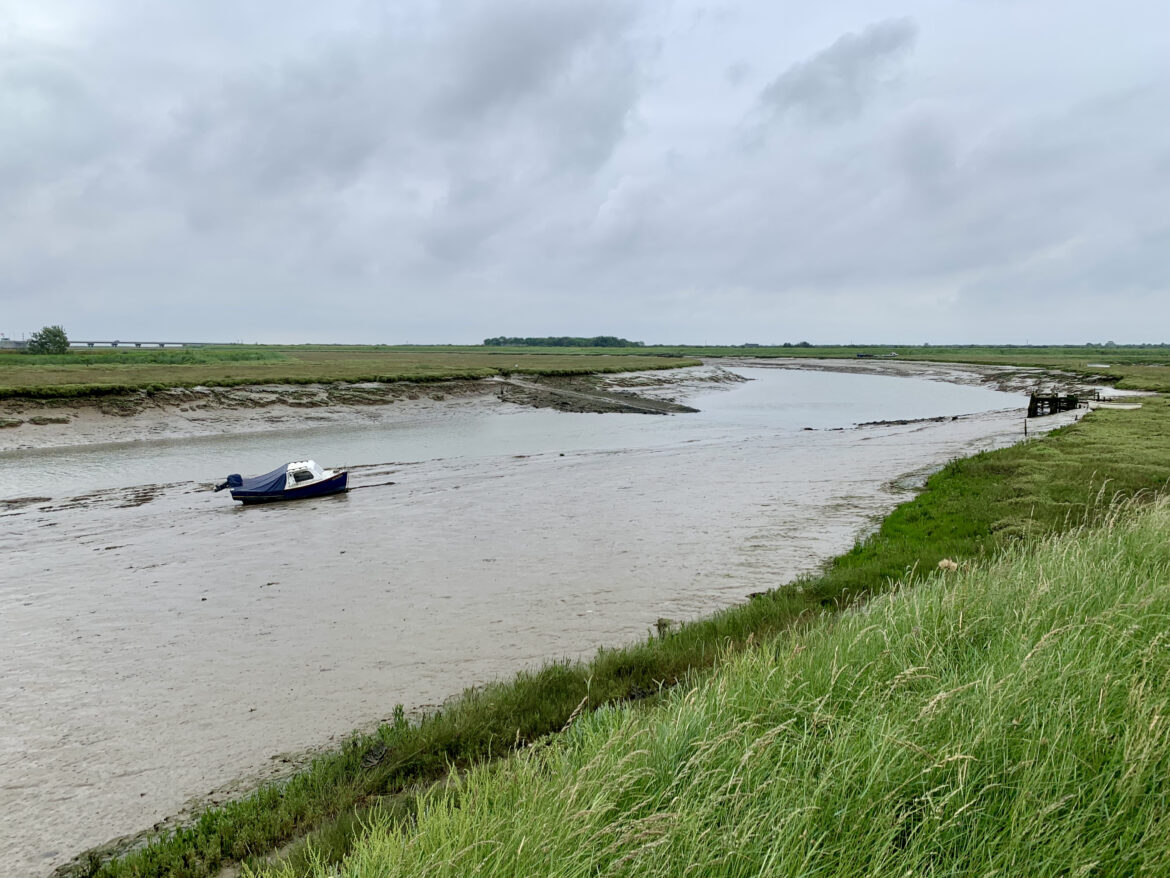 After parking the van in the parking area outside the gates of the boatyard I walked through the gap in the bushes opposite and out onto a small area of scrubland which then leads up to the top of the sea wall which then runs along the banks of the creek. The creek then runs to the River Roach in one direction and the River Thames in the other. Being a smallish creek the tide doesn’t hang around very long and on my trip there it was on its way out, in fact it was very nearly low water. I don’t mind walking tidal estuaries at low water as this is a good time to watch the resident wading birds feeding in the silty mud and also allows me to have a little explore along the marshes to see what I can find as you will be surprised what ‘flotsam and jetsam’ you stumble across let alone the all the little creatures that live around this kind of area.

Walking along the top of the wall it wasn’t long until I passed the yacht clubs building with its cracking view over the marshland. Further along and there was a large patch of Wild Fennel coming close to flowering and the sloping grass wall was covered in Dandelion seed heads waiting to be disturbed so they can drift away on the slightest of breezes. A little stroll further and I came to my favourite part of this walk, I have walked here a few times before but have not done the loop that I was planning on doing this time around, a causeway which crosses the creek to Rushey Island. This causeway is a good point to stop and have a little explore around the rocks that are scattered around nearby as I,ve found a lot of crabs, shrimps, shellfish and even fish living in the shallow pools underneath the larger rocks. Either side of the causeway is slightly deeper water than the rest of the creek so when the tide is out it creates small pools which I have seen flatfish and baby bass swimming around in. Shortly after the causeway the path cuts away from the seawall through a farm, there is a public right of way through the buildings that you can follow, and then out across the farmers fields.

The route across the fields is easy to follow and you pass through a few different fields, crossing over a couple of small foot bridges which span across the farms drainage ditches along the way, with different crops growing. Once through the fields you end up back on the approach road to the boatyard but after a 100 yards or so there is another footpath which cuts straight through the middle of another farmers crop field. I don’t really like taking this sort of pathway as it doesn’t feel right to me pushing your way through a farmers livelihood but there was an existing track already so I followed it even though it was fairly overgrown. The gate at the other end was even more overgrown but I managed to push my through easily enough and then follow the track across the scrubland I had originally started on and then back to the parking area and the van.

All in all it was a pleasant little walk that I would recommend, but maybe early or later on in the year when there isn’t so much vegetation growing across the pathways. I’ve recorded the exact route in my KOMOOT account so click HERE if you want to view it.