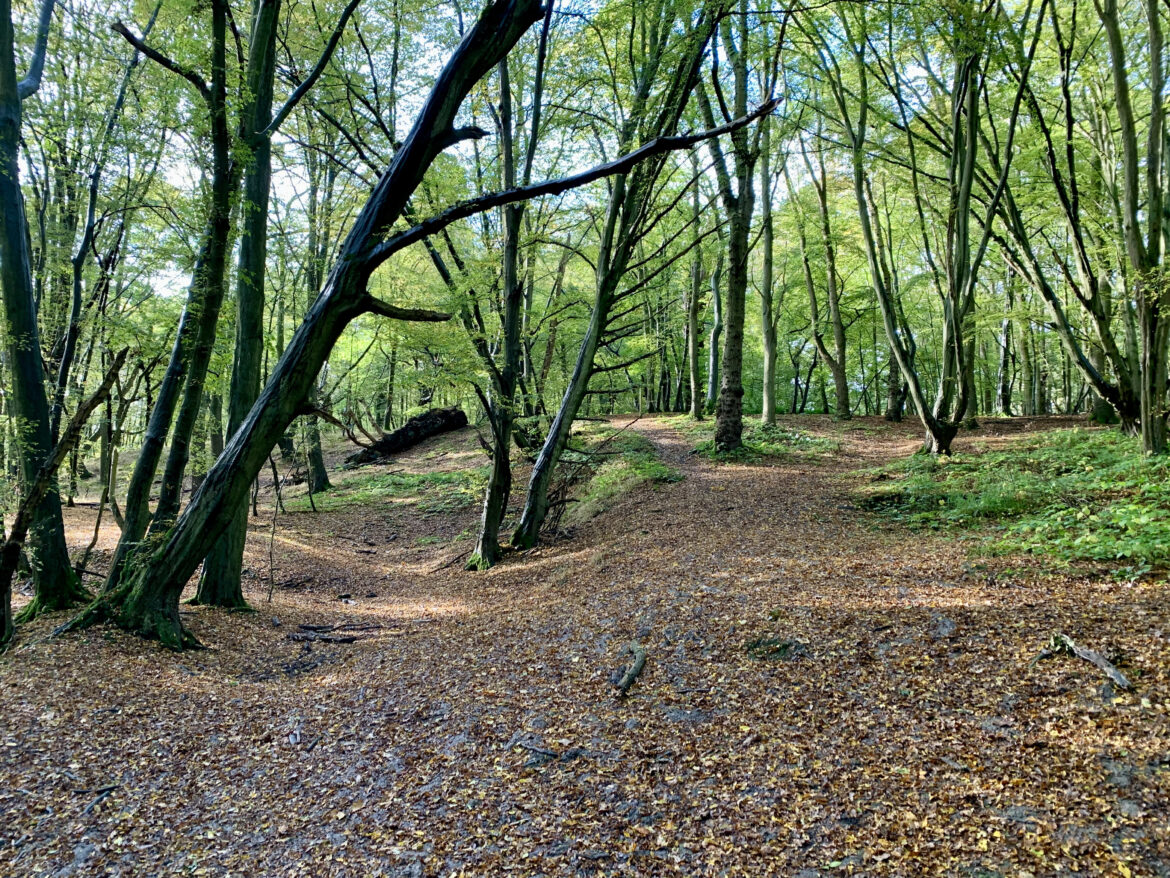 The weekend was forecast to be horrible and wet both Saturday and Sunday but there was meant to be lighter rain on the Saturday morning, with possibly a dry afternoon, so I decided that I would take the boys out on that day instead of our usual Sunday jaunt. Now I am really lucky in that I have some wonderful places to walk the dogs locally but sometimes I just need a change of scenery ad today was one of those days. Most of my dog walks are in areas with open fields or waterer similar place, but not often do I take them to any wooded areas, the reason being is that Choccy loves to get himself lost amongst the tree areas and when this happens he goes into panic mode and just keeps running all over the shop no matter how much whistling and calling you do. Obviously we always manage to get him back but it is a bit stressful, mainly for me as he just carries on with walk as though nothing has happened. Well I decided to try the pair of them in some woods again and after a little troll through the memory banks I opted to take them to Thorndon Country Park just outside Brentwood, somewhere I have been a good few times over the years but not really explored that well.

It was lightly raining when we pulled into the Thorndons car park and once we had devoured our cheeky sausage and egg muffin and drunk our coffee we laced up our boots, put the boys on their leads and zipped up our wet jackets before walking off through the car park and down the track that leads to the pond. Its a lovely short walk through a little woods then an open field before entering another woods which surround the pond, well small lake really, and are the outer edges of the woods proper. The boys, as expected, saw the water and jumped straight in and started swimming around snapping at the tree leaves that were floating on the waters surface. We had a little session of stick throwing so they could jump in and out of the pond and swim to retrieve the sticks before we set off along the pathway that lead along the bank and deeper into the woods.

As I walked into the ancient woodlands the sound of traffic on the nearby Arterial Road disappeared and all you could hear was bird calls and droplets of rain falling onto the leaves that covered the woodland floor. Before I had even ventured a hundred yards I started to spot mushroom literally everywhere starting with the Fly Agaric, the classic toadstool red cap with white spots, followed by some White Saddle a mushroom I have not seen before, then I found a small growth of Corel Fungus again a species I have not seen before. In fact throughout the enter walk I spotted mushrooms practically everywhere, lots of different species, and it was a mushroom hunters paradise. But I was not there to sniff out fungi, I was there for a nice walk with the pooches so I picked myself up out of the leaf litter and carried on my way along the tracks that run through this lovely woods. After an hour or so, I guess, the trees started to thin out a little and I found myself walking along the edge of some farmers fields for a short distance. Luckily the rain had now stopped and the sun was trying to come out from behind the clouds as I strolled along some gravel tracks before taking a smaller pathway back into the woods and continuing on under the canopy of the trees.

Throughout the woods there is a labyrinth of tracks and pathways that you can take to explore one part of the woodlands or another but I had kind of plotted a route through using my KAMOOT app on my phone which fortunately shows all of the known tracks, a seriously handy app to have I reckon. Soon the woodland came to an end and the remainder of the walk was through some grasslands which gave some cracking views of this part of Essex. Dotted along the way were some nice benches so I had a sit down for a while on one of them and bathed in the warmth of the sun. The boys had a little chill time too as well as some water and a few scooby snacks to keep them going. Before not too long I was back where I had started and heading up the hill towards the van.

Thornton Country Park is run jointly by the ESSEX WILDLIFE TRUST and Essex County Council and , in my view, is an exceptional beautiful place to visit with plenty of wildlife to see and emerce yourself in. The tracks and pathways are pretty flat, though they do have plenty of hills and slopes to walk up and down, so ideal for taking the family and there is a small cafe just by the car park, although I think it was closed on man visit. I would definitely recommend paying the place a visit and I will definitely be revisiting in the near future.

I recorded the walk on my KAMOOT app so if you want to follow the exact route I took then click the link HERE.