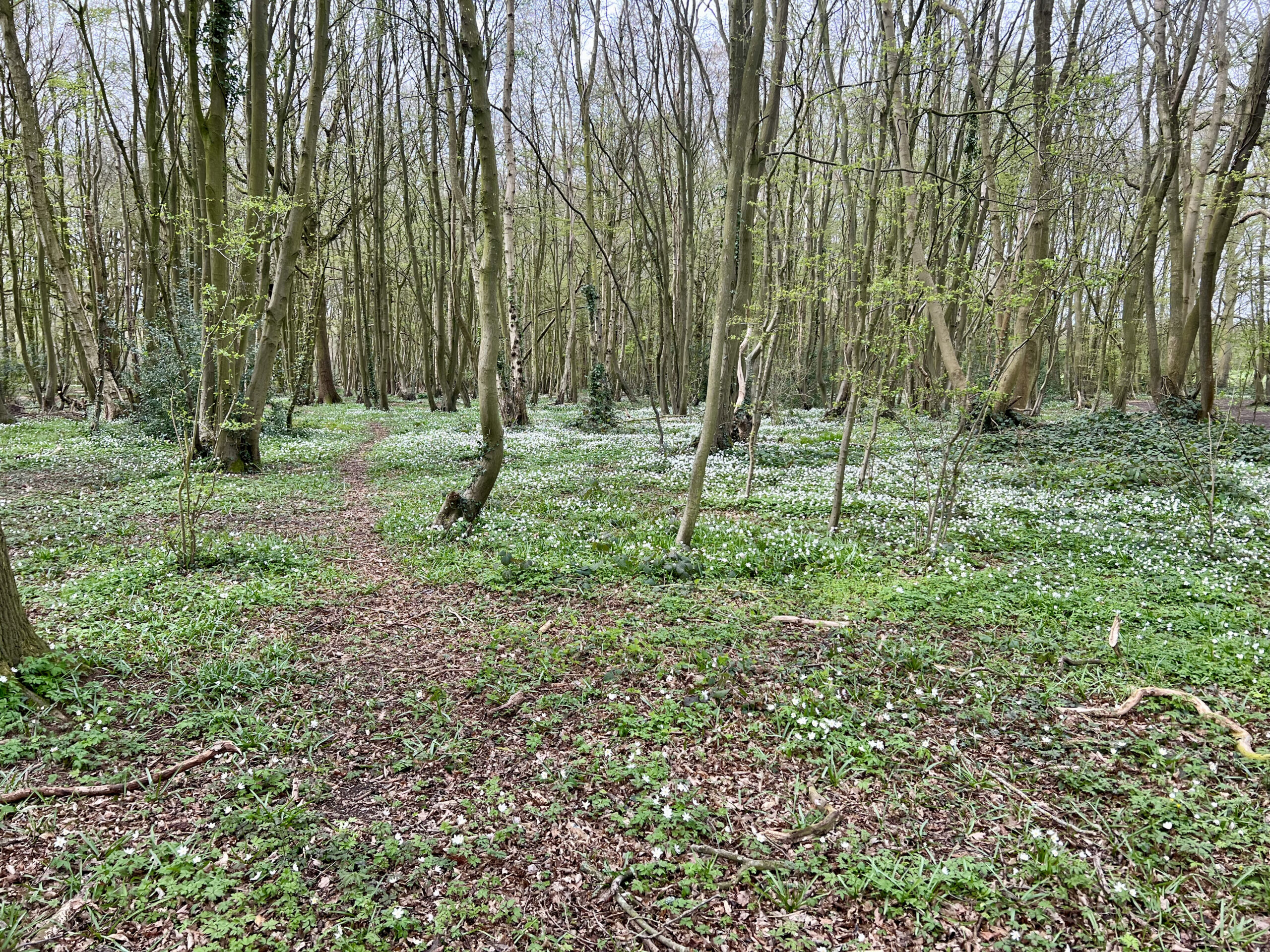 I pretty fortunate that locally to me, within a couple of miles, there are numerous woodlands that are open to the public. The largest and most well visited is Hockley Woods, a beautiful ancient woodland covering over 130 hectares, but just a stones throw away, and in fact in-directly linked, there are a few smaller woods situated in the Cherry Orchard Country Park area. These are the closest woodlands to me and the ones I regularly walk with my pooches.

As you can see from the above map the woods I am about to write about are all shown, and I have also included a copy of the route I took which I have taken from my KOMOOT route plotter/recorder account. You can see this route HERE if you have would like see the route in better detail.

After parking my van in the Gusted Hall car park I set of down the hill through the woods watching the birds flit from tree to tree and a squirrel running along some branches high up. Gusted Hall Woods is not a very large patch of woodland but it sure is pretty with WOOD ANENOMES, SNOWDROPS AND BLUE BELLS growing at certain times of the year thats not to mention numerous species of trees and other woodland plant life. The main track runs straight through there middle of the trees but there is a few smaller tracks that spur of from this if you like to have a little explore around. I stuck on the main pathway and in a short time I was out the the other side of Gusted and entering The Scrubs.

I forgot to say that when I parked up in the car park a curious squirrel ran down a tree, only a few yards from me, to say hello. As you would expect as soon as I got my phone out to take a picture he scurried back up the tree he came down. He did stop and pose for a couple of seconds allowing me just enough time to get a quick photo.

The Scrubs is a small patch of woods mainly consisting of Hornbeam with some Oak and other varieties, I’m not that great with tree identification but these I know. Due to the Scrubs small size and tree canopy there is very little plant growth through it so you can walk most of it easily. At the end of the woods you come to the River Roach, which flows through the country park, and have to cross Pooh Sticks Bridge which is where my boys usually end up having a nice swim as the water is deep enough for them here. Turning right just after the bridge I followed an overgrown track along the river before it opened out into a large field. This is a big, beautiful field covered in wildflowers at various times of the year and is a lovely spot to sit and relax in the sun, when it is out which it wasn’t on this walk.

It was not too long before I was at the other side of the filed and following one of the muddy tracks that leads into the next woodland area New England Woods. Now this is classed as an ancient semi-natural woodland and is a great place to explore as I have found numerous mushroom species growing beneath the dense tree canopy. The river borders one side of the woods and is easily accessible for the boys to have a splash about and the other side is fields. The floor of this woods was covered in WOOD ANENOMES and looked amazing, so I decided to have a little sit down on a fallen tree and drink my coffee.

Nice and rested I continued my journey through New England Woods walking the path that runs alongside the river and before long I was walking through another woodland. New England basically changes into Grove Woods and the trees and ground cover also changes. Grove Woods is classed as a High Forest with a mix of Ash, Oak and Hornbeam and believe me when I say there are some beautiful big Oak trees in this small patch of woodland. I find it strange how the woodland floor changes so greatly from one wood to another, as New England is quick sparse but with woodland flowers growing yet Grove is pretty heavy with bramble growth covering a lot of the floor where there isn’t a track. It wasn’t too long before I had walked through to the other side of this woodlands where a road cuts through it. It was at this point that I about turned and started my trek back to the van.

One odd thing, well I thing its odd anyway, that I did spot was a small patch of daffodils growing on the opposite side of the river to where I was. I had to scramble down into the river and wade 10 yards or so along it before I could actually see what they really were. Behind them was thick scrub and brambles and considering the effort I had to take to get to them I can’t figure out how they actually got there in the first place. Anyways they were pretty so i took some photos of them.

On my way back to the car park I took a couple of different tracks through the same woods but got to view them from different directions. Once out into the large field I opted to walk along the top tree line before walking back to the river and crossing the bridge before cutting through the farmers field on the opposite side which took me to the far side of Gusted Hall Woods and along a nice slightly overgrown track back to the car pack.

In total the walk was just under 3 miles long and took me through some beautiful woodlands and open fields and both the booths and myself thoroughly enjoyed it. If you want to see the exact route I took then click HERE and the link will take you to my KOMOOT account.

To finish off I will leave you with some photos of the wood anemones growing in Gusted hall Woods and New England Wood.

The view I had whilst supping on my latte this mor

A few weeks back I took a wander through some loca

A few photos from this mornings dog walk before th

Morning all…. Back in the UK and up early to wal

I forgot to mention the hotel I’m staying in has

I’m half way through my little holibob In Brno,